Dr. Michael A. Schmidt, President and Chief Scientific Officer of Sovaris Aerospace, was invited to present his team’s research at the Life Sciences section at the Next-Generation Suborbital Researchers Conference in Boulder, CO on June 3, 2013.

Dr. Schmidt presented the work of his team, which includes research partner and co-investigator Dr. Thomas Goodwin of NASA Johnson Space Center. Dr. Schmidt’s group is focused on assessing the biological, biochemical, and physiologic demands placed on human and biological systems in the complexity of space.
His presentation was entitled, “Can We Afford to Fly Subjects with Unstable DNA into Radiation Environments? Advances in Personalized Assessment & Countermeasures.” The summary of the presentation is outlined below:

Introduction
Significant attention has been given to methods of shielding human space participants from radiation. This includes extensive efforts focused on various forms of shielding to protect astronauts within the vehicle and on finding molecular countermeasures that might be administered.
Presently, our group has identified a novel approach to space radiation countermeasures, which is based on the DNA stability and repair capability of individual space participants. This phenomenon is linked to individual genotype and micronutrient status, both of which are modifiable by appropriate pre-flight, personalized countermeasures.

By example, reducing folate concentration from 120 nmol/L to 12 nmol/L in lymphocytes is equivalent to an exposure to 0.2 Gy of low linear-energy-transfer ionizing radiation. Thus illustrating that these pre-mission molecular variants can have adverse effects on DNA akin to what we are hoping to negate in astronauts encountering radiation in space.

Other common gene variants facilitate excessive iron accumulation, which creates unstable DNA through oxidative mechanisms. Magnesium is a central component of most DNA repair enzymes (base excision repair, etc). Significant serum, urine, and tissue declines of Mg has already been found in ISS participants on long missions, thus raising the question of whether we are already flying astronauts with diminished capacity to repair DNA damage.

Conclusion
We propose that an important safeguard against radiation exposure, regardless of how modest the cumulative radiation dose, is assessment of the known genomic, proteomic, and metabolomic variants that impact DNA stability and DNA repair. This would be followed by pre-mission countermeasures personalized to each participant. For repeated suborbital flyers, such as pilots and scientists, this may be one means by which the cumulative effects of low level radiation encountered on recurring missions can be reduced. Conversely, failure to attend to issues of DNA stability and DNA repair may mean that we permit participants to enter the suborbital environment with greater risk to DNA integrity. 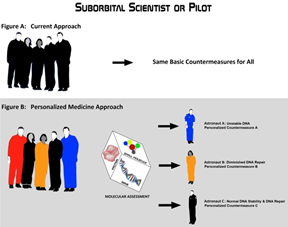 Sovaris Aerospace, LLC is a private company focused on medical solutions to human performance in extreme environments. Sovaris develops assessment and countermeasure solutions for humans engaged in a range of demanding conditions, including space flight, professional race car driving, collegiate and professional athletics, and many others. Sovaris also develops a range of solutions in human preventive medicine and disease state management. Sovaris has collaborations with a broad range of institutions, investigators, and private groups, including NASA Johnson Space Center, NASA Ames Research Center, Colorado State University, the University of Manchester, and the Southwest Research Institute.