Any individual entering a space environment who relies upon medication for the management of a medical condition would benefit from a profile of his or her individual drug metabolizing enzyme capacity.  This is recommended in order to minimize adverse drug reactions when in the space environment and where medical attention will not be immediately available.

The first such characterization of individual space participant biotransformation capacity should be based on individual cytochrome P450 (CYP450) profiles.  The cytochrome P450 family (CYP450) is a major subset of drug-metabolizing enzymes.  The CYP450 family of enzymes includes, but is not limited to, the following important genes:

Some CYP450 genes are highly polymorphic, resulting in enzyme variants that may shape variance in drug-metabolizing capacities among individuals at Earth gravity (1G), let alone the microgravity environment.  For context, it is estimated that genetics account for 20-95% of variability in drug disposition and effects.  CYP450 metabolic capacities may be described as is shown in the Drug Metabolism Genotype and Endophenotype Characteristics table.

For an individual on medication who is entering the space environment, it will be helpful to ensure that any medication ingested is compatible with his individual CYP450 profile.  Where conflicts exist, alternative medications can be chosen that are metabolized via a different CYP pathway.  While this approach is desirable for clinical care on Earth, it is even more essential in space.  This is because we know little about how drug metabolism in space differs from that on Earth and there is more risk if an adverse drug reaction occurs far from medical care. 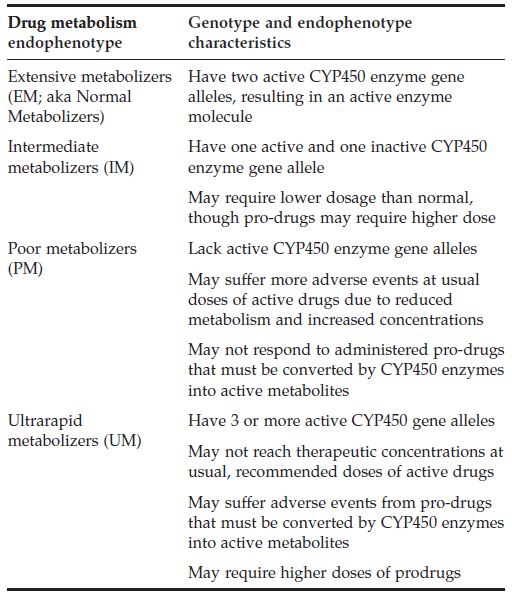 Phase II profiles can be conducted for each space participant and, where the evidence is sufficient, be used to develop appropriate countermeasures.  For the Phase II profile, assessment considerations include, but are not limited to:

For example, in most cases of glutathione conjugation, more polar glutathione conjugates are eliminated into the bile or are subsequently subjected to other metabolic steps.  This eventually leads to formation of mercapturic acids, which are excreted in urine.  This process depletes glutathione stores, as GSH binds drugs through the conjugation of Phase I intermediate metabolites.  This depletion can limit the amount of glutathione available for future drug metabolism reactions and, also, alter the REDOX balance of the cell.

For instance, the analgesic acetaminophen is converted to the electrophilic N-acetyl-p-benzoquinone imine (NAPQI), which is conjugated for removal by glutathione.  If glutathione is in poor supply, NAPQI exerts highly toxic effects by covalent reactions with proteins, such as those found in mitochondria.  This can lead to liver damage. If glutathione depletion is identified through blood chemistry (low GSH or low GSH:GSSG ratio), pre-mission glutathione or glutathione precursors can be provided at the dosage needed to assure optimum mission status.  Stable glutathione precursors, such as N-acetylcysteine, can be provided on missions.

Our services in support of pharmacogenomics and pharmacometabolomics in spaceflight span four primary areas.  These include:

For more information, look for our chapter in the Handbook of Space Pharmaceuticals